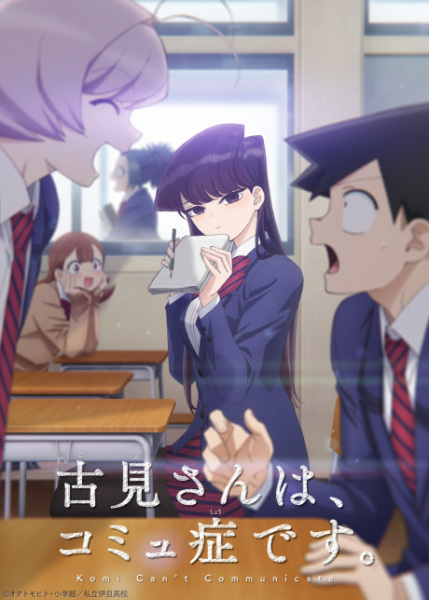 Komi can't Communicate took the world by storm a few years ago, it was insanely popular and not for the reasons most anime are. The manga for Komi Can't Communicate was one of the most wholesome of the year. Pictures of Komi made the rounds online and she was turned into a meme really quickly. Let's not forget about all the arguments of Komi being 'best girl', though that's something that happens frequently. Anime fans are always arguing over who the best girl is. Regardless, it felt like it was only a matter of time until a Komi Can't Communicate anime was announced. The news did eventually come, but it took way longer than fans expected. Now the anime is heading to Netflix later on in October.

A new trailer was released on Tuesday, giving us our best look so far at the upcoming Komi Can't Communicate anime. For those who aren't familiar with the source material, the show revolves around the titular Komi. Shouko Komi becomes famous on her very first day of High School, but everything isn't as it seems. Komi is super shy and suffers from some serious social anxiety. She also doesn't have any friends, and after making her first she sets a goal. She wants to make 100 friends, and she'll need all the help she can get!

Komi Can't Communicate is a slice of life manga, and the anime will undoubtedly follow suit. The show plays off of different art styles. For example, Komi's cool exterior is often misunderstood. When the art style shifts to show how she really feels, it's always good for a quick laugh. If you want intense action, then this might not be the anime for you. If you want a wholesome, adorable slice of life anime though then odds are you've found a good one. Or, maybe you've been impatiently waiting for the Komi anime to come out, and already view her as the best girl. Regardless of where you land, you can catch it on Netflix soon.

Komi Can't Communicate will premiere on Netflix on October 27, with new episodes dropping every week. Will Komi make 100 friends and beat her communication disorder? I hope so, and I can't wait to find out!