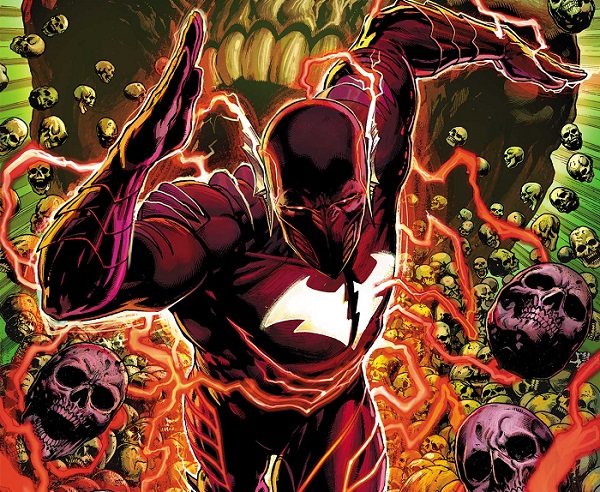 The Flash Director Might be Teasing The Red Death
September 19, 2021
by
Alexander Ouellet

The Flash film is shaking up to be one hell of a DC film. With the return of Ezra Miller and not one, but two, Batmen, we're in for a hell of a film. There's even more than that, too. This film will also introduce a brand new Supergirl into the DCEU, one played by Sasha Calle. They've been working on the film for some time already, but all we've really gotten are some teases. Specifically, some pictures were posted to social media of certain character's suits. Not even the entire costume, just the emblems! One of these included what appeared to be Michael Keaton's original Batman suit, which had fans incredibly excited. Myself included of course. Now The Flash director, Andy Muschietti might be teasing the Red Death, through the most recent teaser picture. He posted what appears to be a suit with a mashup of both Batman's and The Flash's logos, which is what is causing this whole speculation.

For those who don't know, The Red Death is a recent addition to the DC Universe. He appeared during the same storyline that introduced the Batman Who Laughs. Red Death is a combination of both Batman and The Flash, with a pretty twisted origin story. The origin story involves Batman strapping The Flash to the front of the Batmobile and driving the two into the speed force. This causes the two to combine, which ends up creating one being: Red Death.

Now, this suit posted by Muschietti doesn't necessarily confirm anything, keep that in mind. So far this is all speculation by fans. Still, there aren't that many likely candidates when you look at the emblem. A combination of The Flash and Batman definitely points towards Red Death, but we'll have to wait for some time, still, before we have any kind of confirmation. Then again, maybe it won't be as long as we think.

The Flash film will be a part of the DC FanDome 2021 next month. DC Hasn't said specifically what we'll see in regards to the film, but we know it will be featured in some way, shape, or form. If we're lucky, we'll finally get a look at what Michael Keaton's role is in the upcoming film. Something Muschietti said previously does make it seem like it may not be the Red Death he is teasing. He said what drew him to The Flash were the human elements and mentioned being unable to promise any horror elements would be present. I'd definitely consider Red Death something our of a horror scenario.

Here is the full quote, for context. This is what he said previously when he spoke to Fandango.

"What captivated me about The Flash is the human drama in it. The human feelings and emotions that play in the drama [of it]. It's going to be fun, too. I can't promise that there will be any horror [elements in it], really, but it's a beautiful human story."

If the director is teasing The Red Death does that make you more or less excited about The Flash film?

Look out for news on The Flash this October at the DC FanDome 2021, and then catch it in theatres on November 4, 2022.