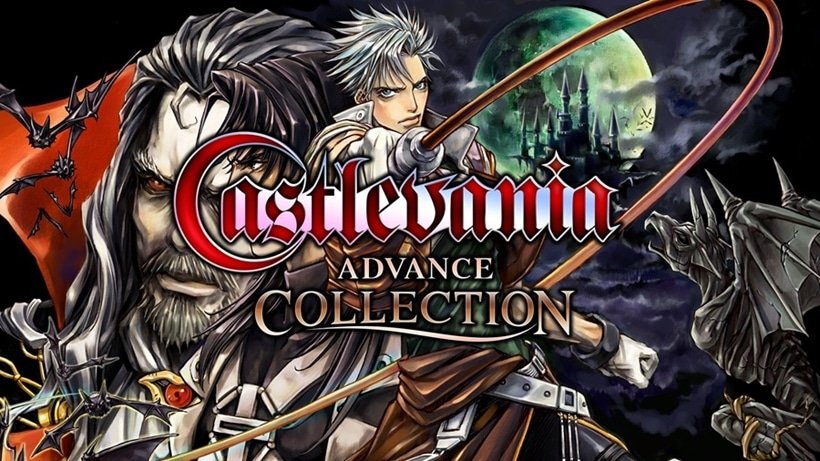 The Castlevania Advance Collection is Real and Already Released!
September 25, 2021
by
Alexander Ouellet

The games have been touched up a little bit and include some of those aforementioned improvements! Rewind, Save/Load and Replay are all included in this release of all four games. But that's not all! There's a gallery where you can check out the box art from all the regions the game was released in. The official description also promises there is some artwork fans have never seen before! There's an even cooler feature though that lets you pick which region of the game you want to play! That means you can pick the North American, Japanese, or European versions of the games. There's even an encyclopedia and a music player!

Based on everything I've read and seen of this release, Konami went all out. It seems to me like they really wanted this collection to be the definitive edition of these games. That should put Castlevania fans at ease, especially since the game was available at almost the same time it was announced. Nintendo showed off the trailer on Thursday and promised the game would be available later in the day. That means if you want to play the Castlevania Advance Collection you can grab it from the Nintendo E-Shop right now! It's also available on Playstation and Xbox.

Here is the official description of the game, taken right from Nintendo's website! Just in case you want some more information, beyond the trailer, I included above:

Count Dracula is once more back from the dead...

Join the fight against Evil in the Castlevania Advance Collection, a compilation of timeless action-exploration masterpieces!

In addition to the three legendary Castlevania games that were first released on Game Boy™ Advance, this collection also includes Castlevania: Dracula X and some never-before-seen sketches and artwork from the games!

All four games are enhanced with newly added modern features such as Rewind, Save/Load and Replay, making this the best way possible to experience these classics or discover them for the first time! This collection also boasts a handy Encyclopedia, a Music Player with all soundtracks and you can even change the ROM Region to play all games in different versions.

Castlevania: Circle of the Moon (GBA) - This was the first Castlevania title released on Game Boy Advance! The story follows Nathan Graves, a vampire hunter apprentice who enters Dracula's Castle along with his Master in order to prevent the dreaded return of the Count. Combine action and attribute cards to create over 80 unique spell effects, ranging from fire whips to ice blizzards, with the 'Dual Set-up System'.

Castlevania: Harmony of Dissonance (GBA) - This was the second Castlevania title released on Game Boy Advance! Play as Juste Belmont, the grandson of legendary Vampire Hunter Simon Belmont! This title introduced a lot of new features to the franchise, such as 'Boss Rush' mode and the 'Spell Fusion' system that lets players combine Sub-Weapons with Spell Books to cast devastating spells.

Castlevania: Aria of Sorrow (GBA) - The third and final Castlevania game on Game Boy Advance! Soma Cruz, a young high school exchange student in Japan, is somehow involved in the eternal cycle of reincarnation of the Dark Lord himself. What role does Soma play in all of this? Will he be able to return to his own world? Aria of Sorrow also introduced a brand new attack system called 'Tactical Souls', that lets Soma Cruz capture the souls of slain monsters to acquire their abilities. (100+ abilities in total!) Aria of Sorrow also has a ton of New Game+ content.

Castlevania: Dracula X (SNES) - Castlevania: Dracula X is a reimagination of the cult action game Castlevania: Rondo of Blood. Released on the Super Nintendo Entertainment System™ (SNES), Dracula X has been acclaimed as one of the most challenging Castlevania titles ever created. The Dark Lord Count Dracula rises again from the dead to revive the forces of darkness and to annihilate this corrupted world and create a new one. You are Richter Belmont, heir of the Belmont family, and you set out for Dracula's Castle to defeat its evil master. Fight your way through Dracula's Castle and defeat the toughest enemies with the new special attack 'Item Crash'!

Gallery - Browse through scans of the original package designs and discover incredible artwork never shown to the public before.

ROM Region Selection - You can choose between the Japanese, American, and European versions for each game.

Encyclopedia - Learn more about all three GBA games thanks to their dedicated encyclopedia. Detailed information on enemies, the 'DSS' system, the 'Tactical Soul' system and the 'Spell Fusion' system will help you truly master each game's unique combat system!

Music Player - Listen to any of four complete soundtracks any time you want. You can even create your own playlists!

Save/Load - You can now quickly save and reload at any point in the game. Even right before that deadly attack from Dracula himself.

Rewind - You can now rewind the state of the game for a few seconds for a second chance. It is almost like being resurrected...