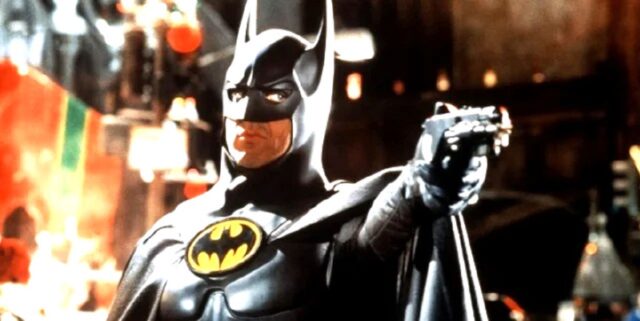 Michael Keaton still fits in his original Batsuit! It's been thirty years since Michael Keaton donned his iconic Batman costume in the original two Batman films. According to him that old suit still fits! He even says it has the same dimensions and everything! Guess Keaton has been keeping in shape, eh? I wonder if they're using the exact same suit or if they made a new one. I suspect they made a new one, though. I can't wait to see Michael Keaton all suited up again! Though, I have to admit I've only ever seen Batman and not Batman Returns. That might be something I have to correct here pretty quickly. Especially if this version of Keaton's Batman really is the same character. That hasn't been confirmed yet, though. Not completely.

Keaton sat down with Stephen Colbert recently, which is where he revealed that the suit still fits. Honestly, the interview was actually quite humorous and I recommend checking it out. Keaton looks super stoked to be Batman again, which just makes me more excited to see him be Batman again, too!

"Svelte as ever. Same dimensions. Same fitting. It was great, it was great. I don't know how many there are? Like 77 Batmans. They probably should form their own union." he told Colbert the other night.

Keaton has also previously revealed that he had no trouble getting back into being Batman. In fact, he described the entire experience as "shockingly normal". Maybe he was always meant to return as the Dark Knight.

"It was shockingly normal. It was weird. Like I went 'Oh, oh yeah, that's right.' But also then you start to play the scenes and a lot of memories, a lot of interesting sense memories." he told Jake Hamilton on Good Day Chicago.

We should be seeing Michael Keaton as Batman once more next year when The Flash hits theatres! The film will also introduce a brand new version of Supergirl played by Sasha Calle. You should check out the Multiversal News social media to come tell me how excited you are for Michael Keaton's return as Batman.