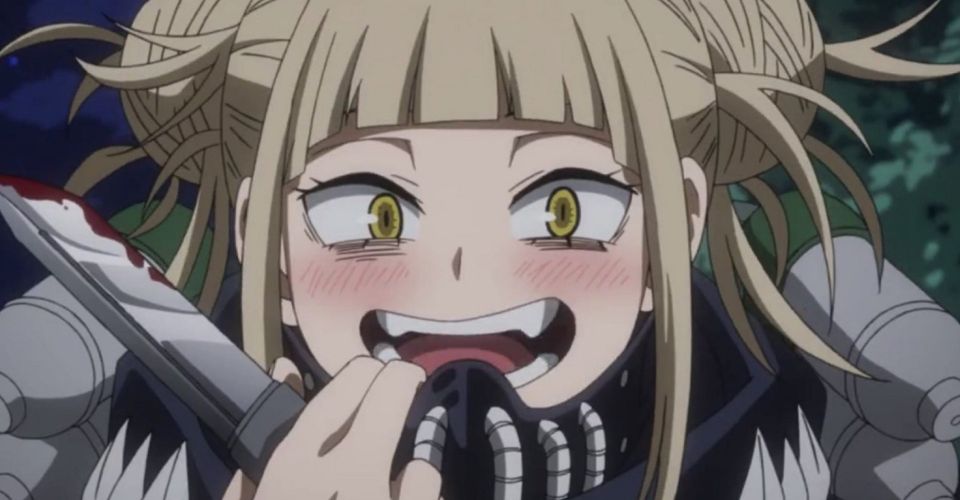 Himiko Toga is the ninth most popular character in My Hero Academia! That's right, the bloodsucking cutie who enthralled tons of fans from her first appearance ranks in the top ten characters on My Hero Academia. I'm not sure how this compared to previous years, though I've enjoyed Toga from the start. She's always been one of my favorite characters, since her first appearance. A combination of her being cute and scary is what did it for me, not to mention her intriguing quirk. I love her even more now that I've seen season five's My Villain Academia arc. Her backstory was just... so bittersweet. It's hard to describe. I wonder if she was ranked higher in previous years? Though, according to the picture these results are from 2019. Unfortunately, Toga's popularity seems to have dropped over the last two years. I found the 2021 ranking immediately after writing this, but didn't want to waste a good article. Besides, Toga will always be #1 in my heart!

Himiko Toga was first seen in episode 31 of the anime, at the conclusion of the Hero Killer Stain arc. It was only a quick glimpse of her after she'd murdered someone in an alley. We really got our first look at her during season three though, when she attacked class 1-A during their training while camping. This was while they were working on developing their quirks! Toga attacked Tsuyu and Uraraka, falling in love with both Uraraka and Izuku at first glance. The way she talks, how psychotic she is, there's just something alluring about her character. Not to mention, she's cool if you like psychos.

If there's one thing that really hooked me on her character though, one thing above all the other things I just mentioned, it's her voice actress. Himiko Toga is voiced in English by Leah Clark. Leah Clark really brings Toga to life with her awesome portrayal of the blood-obsessed villain. Clark is in tons of anime, including Miss Kobayashi's Dragon Maid, where she voices Miss Kobayashi. You should check that one out too. I think Toga is where she really impresses me though, and without her, I can't imagine Toga having the same appeal. She really just nails it, from the way her voice rises as she grows more unhinged while talking about the people she loves.

For the record, if you're a huge Toga fan you have to check out Leah Clark's website. She sells autographed prints, and even some pop figures, that she'll ship directly to your house. You can even request to see her sign it live on Instagram, at least last time I checked. I'm actually waiting for a Toga pop figure right now and I'm really excited to add it to my collection!

Where does Toga go from here though? Well, no spoilers, but if you read the manga you know we'll be seeing her in season six. After that... I have no idea. I've read every chapter of the manga, including the one that came out yesterday, and I don't know when we'll see Toga again. Hopefully, it's soon though, especially since her backstory gives her a whole new layer. Is Toga really psychotic, or is sucking someone's blood just how she expresses her love? Guess it depends on what end of the knife you're on!

Regardless of anything else, congratulations to Himiko Toga for ranking ninth in the rankings. In 2019, anyway. Why am I not congratulating Bakugo on first place? Because based on my limited research he gets first every freaking year, and that's just not fair!

At the end of the day though, My Hero Academia has an awesome cast of characters, and almost every single one is interesting and unique in their own way.

Do you disagree with anything I said? Well, come let me know on Facebook or Twitter. I'm down to talk all things MHA and I'll link those socials below!