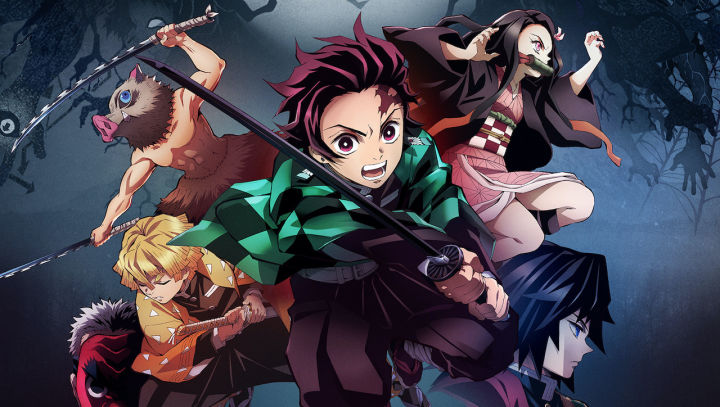 Demon Slayer The Mugen Train breaks another record but this time on TV! That's right, all aboard because the Mugen Train can not be stopped, and Demon Slayer is riding that baby to the top of every chart in the world. Okay, I'm being a little dramatic but the movie has done incredibly well. It already broke some record when it came out in Japanese there's, then again when it released in North America. It's becoming obvious Demon Slayer is lining up to be one of the biggest anime of all time. Not surprising considering it has an amazing story, beautiful animation, and Nezuko. What record did Demon Slayer break this time? Well, the movie aired on Japanese TV for the first time, where it made a huge splash.

Demon Slayer The Mugen Train aired on September 25, and the number of people who tuned in to check it out is huge. Over 11 million people tuned in to see Nezuko get head pats on the train, with that action being rudely interrupted with tons of awesome fights. And a heartbreaking death, right at the end too. Just to put that in context a little bit, the film had 21.4% audience ratings. Do I know exactly what that means? No. But I know that 21.4% is huge compared to several other things on television. Mugen Train picked up a special accolade for those numbers, too. Mugen Train is now the most-watched anime broadcast of the 21st century.

People really, really love Nezuko. More than they love Detective Conan, which held the previous record. I guess Detective Conan's time in the spotlight is done, he's been devoured by Demon Slayer's demons and he will never return. I just wish all the Demon Slayer news was as good as this. Don't get me wrong, I'm super happy the film did as well as it did. It certainly deserves all this recognition. I mean, have you seen the movie? It was freaking amazing! Despite Mugen Train being amazing, I can't help but feel a little letdown. That's only because I have to watch the entire Mugen Train story again when Demon Slayer returns for season 2 this October.

It was revealed earlier this week that Demon Slayer will be recapping, but not recapping, the Mugen Train story. On paper, this makes sense, since some people might have not seen the movie. Still, it's a huge bummer for fans who were really excited for the Entertainment District arc to start. Unfortunately, we'll have to wait until December to see the start of that arc. Thank goodness we don't have to wait that long.

At any rate, let's all give Demon Slayer a huge round of applause. What did YOU guys think of the movie though, I really want to know. I also want to know if you're bummed we have to suffer through Mugen Train again. Why don't you come find Multiversal News on Facebook and Twitter and let me know? Links are down below, along with the one for my personal Twitter. I want to hear from all of you guys!