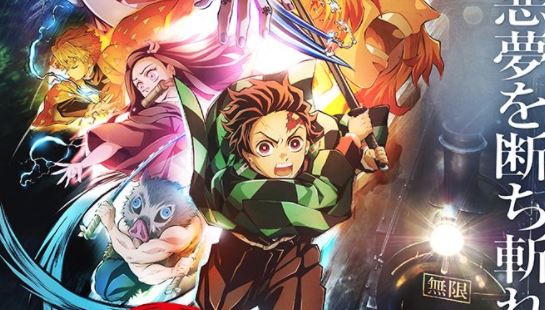 Demon Slayer has a New Poster for Season Two!
September 27, 2021
by
Alexander Ouellet

Demon Slayer has gotten a new poster for its upcoming second season, following the recent announcements. Those announcements have, sadly, made it hard for me to be excited for the beginning of the season. Still, I have no doubt Demon Slayer season two will be excellent, so I can suck up a few episodes of the Mugen Train arc until we start the Entertainment District Arc on December 5th, 2021! After all, I've been waiting for Demon Slayer season two for nearly two years now! What're a few more weeks! Besides, I have to admit that the poster is pretty freaking awesome.

If you're totally confused about what I'm talking about, well... essentially I'm salty that they're redoing the Mugen Train arc. After all, wasn't the whole point of doing the movie to avoid doing the Mugen Train in the anime? I suppose there are some people who will not have seen the movie, but it still sucks for people excited for the show. Like I said above though, it's not like a majority of the season is dedicated to this. We'll also be getting some new content for the arc as well, including more Rengoku backstory. In fact, we'll see the day leading up to him taking the train if I've read correctly. If you want more info though, I did write a separate article about being salty.

Here's that poster, by the way!

At least Demon Slayer season 2 isn't very far away now! The season will be kicking off on October 10th, which is just a couple of short weeks away! This is probably the most anticipated anime of the year. Okay, it might actually be tied with the rest of Attack on Titan's final season, which is coming very early next year. There's another one, I can't wait to see. It's a big season for anime, it seems!

Are you happy Demon Slayer has gotten a new poster for its upcoming second season? Or are you just over it because it's a Mugen Train recap?

At any rate, you can check out Demon Slayer season 2 on October 10th. If you'd rather wait until the Entertainment Disctrict Arc kicks off though, you'll have to wait until December 10th. So, not too bad. Demon Slayer also has a video game coming out in October, so you can actually BE Nezuko! How exciting is that?